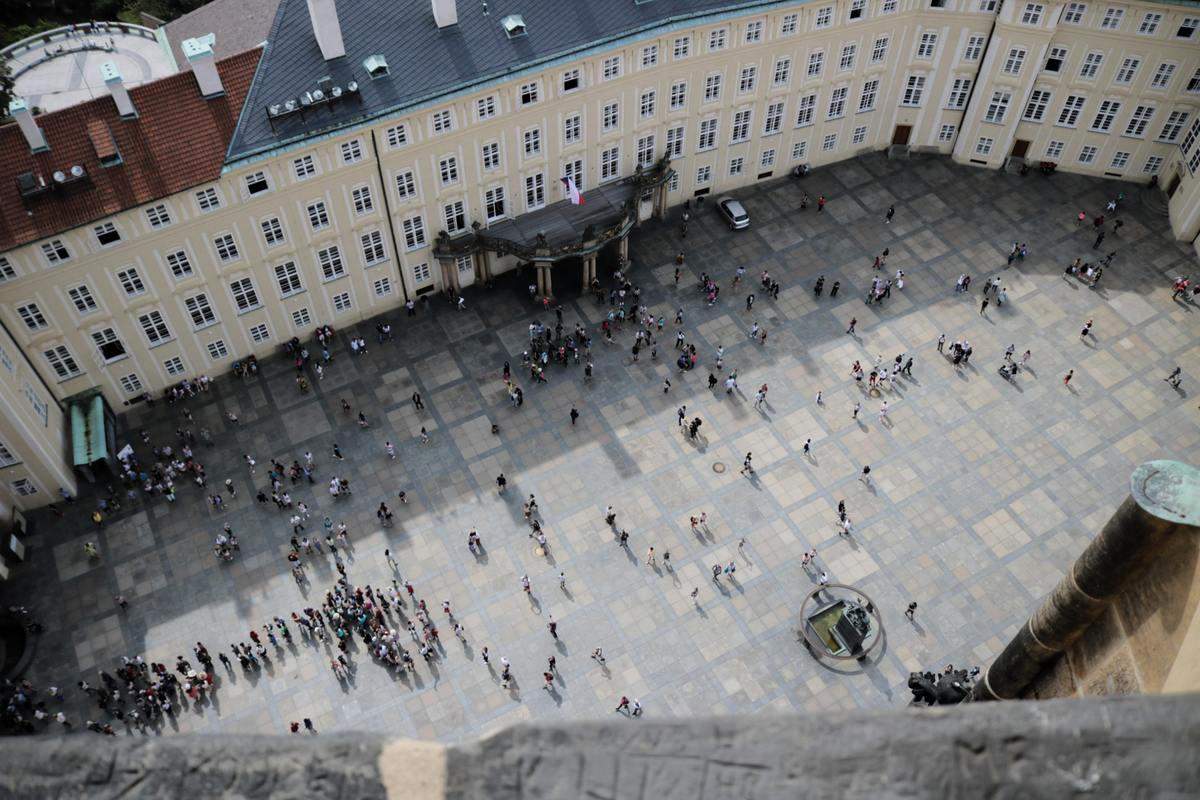 The man stood leaning over the balcony edge as he took the last drag from his America Spirit and looked down on the people below. They looked like pathetic little ants, he thought, and over time, he would touch each and every one of their puny little lives and they would never have any idea about it. After a deep drag, he flicked his cigarette down to the anthill below.

Smiling to himself, he turned to face the glass boardroom behind him from where he had exited. They were still arguing. Dramatic gestures with hands angrily pointing in his direction, the owner's eyes had become locked on their opponent in the opposite seat and apparent opinion. Maybe the stick insects would not be so adamant with their gesticulations had they realised he had now turned around to look at them for fear he might produce the bug spray.

The man had been outside for at least 15 minutes as he had smoked three or four cigarettes so they should, by now, have been poised for his imminent return. But it appeared that their minds, filled with stress hormones, adrenaline and noradrenaline had utterly lost track of time. So much so that the only indication they had, as he re-entered the room, was on a subconscious level the feeling of a shiver running down their spines caused by the cold air entering the room as the door opened and closed behind him. A shiver they would later remember, but wrongly associate with the presence of the man himself as he walked into the room, as a sign of his pure evil. As he thought about this, it made him smile; he had seen one or two of them do the shiver dance and rub their shoulders with their arms crossed in front of their chest. It was all in the detail that added to the illusion.

He stood silently at the head of the boardroom table; arms spread out, and his body in silhouette by the bright red setting sun behind him as he glared at his arguing employees. He stood there silently waiting for them to realise, not unaware of the dramatic imagery he was creating. After all, he had designed it that way. He ruled his kingdom with fear. Fear in the minds of his employees without him having to say a word or lift a finger. Now the insects argued in front of him and slowly one by one they became aware of his presence as they fell silent. Each opponent saw their counterpart falling silent and turned to face the end of the boardroom table with some fear until there was only one person left loudly talking who became aware of their elevated voice in a suddenly silent room.

The silence was deafening. He stood there hunched over glaring at them, silhouetted in the setting sun as they squinted to look at him. He let the silence ring out for 30 seconds that to each, and every employee felt like 30 minutes. In a low deep voice, he said “So have you come to a decision?” already knowing the answer. Nobody spoke up. “That’s settled then” he sat down in his big black leather chair “as you are clearly incapable of making a decision between you. I am making it for you.” He paused for effect as nervous looks shot around the room.

“Tomorrow, we start. You set the wheels in motion tonight. Get the code you have written deployed. Gather the intelligence, and in one week, we start the campaign, and no one outside this room is to find out the full scale of what we are doing. Do you understand me?” he didn’t wait for an answer “No one. If anyone outside this room gets hold of this, then you will have some issues” he stood and fastened his jacket “Do you hear me? YOU, not me, will have issues.” As he walked to the door it opened before him he turned around and shot each and every one of them a direct look “I mean it ladies and gentleman, you know I am aware of everything, don’t make the mistake that could, at best, end your career or worse, forever.” With that, he left the room and made his way down the corridor. As he got to the lift door, he could just hear the murmuring of voices coming from the boardroom. He smiled to himself. They would be there all night. Half of the time would be debating the ethics and legality of it. The other half, defeated and given in to the inevitable, trying to figure out how to get it done.

As he entered the lift, he put his key in the key slot and gave it a turn. This key was the only way to gain access to his top-floor office, which was also his home, and he was the only one with a key. Not one of his employees had ever been up there, and that was the way he liked it, it added to the illusion. He only met with his senior management team on the floor he was just leaving in the boardroom he had just left, and only they and his PA and bodyguards were allowed access to that floor.

The only other access to his private office and the home was via the roof which was only accessible by helicopter. He knew he was a man living in a secretive walled palace, but he knew it wasn’t because he was paranoid. He had a lot to hide. He had enemies, and he knew there were a lot of people watching. Or trying to. And he knew how easy it was because from where he sat in his walled kingdom, he could watch the entire world. From presidents to fishmongers, from Queens to steelworkers in Kentucky he had it all. All the data. All the information. Enough information to topple kings and bring down dictatorships. To start riots and overthrow Congress. To cripple the entire economy or destroy individual lives. He had it all, and only he knew how to access it. He had written that code himself.

Now, as he sat in his private domain in his favourite leather chair, the voices in his head rang out louder than ever. It was nearly time. He had gathered all the information. He had the national leaders of the world all on speed dial, and his plans were taking shape downstairs. It was almost time to set the wheels in motion, bringing it all toppling down. To let all of the cards fall. It was nearly time for this illusion to end. For a new beginning dominated by the network. But he needed to dim the volume to the voices in his head to be still.

He smoked another cigarette letting the thoughts dance around his mind taking shape and moving from subject matter to subject matter. He knew he needed to do this. He required the nicotine to help move them around and let them play out their mad inconsistent dance. He needed to clean the house before he started work. He drew in his last lung full of smoke and slowly exhaled as he put it out, it was as if it was a complete stop at the end of the poorly constructed sentence in his mind. As he ground the cigarette out, it was an end to his mindless meandering aware he had work to do.

The man knew deep down there was some good in him. Still, his intelligence had become his arrogance as he looked at the world around him and its pure ineptitude to manage itself and its affairs. He walked down a corridor to a room that lay dead centre in his home. The room had a white door. On the side of the door were a retina scanner and a fingerprint scanner. He proceeded to use both. After gaining access, he walked into the all-white room, the door closing and locking behind him. Touching a switch that had been behind him, the lights dimmed, and the place became a dark turquoise. In the centre of the room was a single chair facing a single screen with a virtual reality helmet attached. The man sat down in the chair, but he did not put on the mask. Tonight's work would be carried out without it.

He closed his eyes. He took in several deep breaths and cleared his mind. For 10 or 15 minutes, he focused only on his breath. There was no sound in the room. No fear of disturbance. Once he was ready, he started counting backwards from ten. As he did, he imagined himself descending some steps; this was the entrance to his loci, his method, his memory palace; this was where he kept the real secrets. Where it all began. Where the end had been predicted. Knowing the outcome had meant that it had been a simple process of reverse engineering, everything else for him to end up where he was.